Frantic Jack return to Whelan’s for the first time since the launch of their debut album “Independence” in 2010. The night will feature new material penned for there second, as yet untitled, album.

The band is delighted to be sharing the stage with new singer songwriting sensation Sinead McNally who if you haven’t seen before you’re in for a treat.

Special guests on the night are Comedy Music duo “The Guilty Folk” who will bring you to your knees with laughter as well as amaze you with there musical ability.

Tickets are priced at just €6.50 and WILL be available on the door on the night so get to Whelan’s early to avoid disappointment.

We hope that everyone who has supported “Frantic Jack” since the release of the first album can make it down as the lads are determined to debut all their new material to you first. 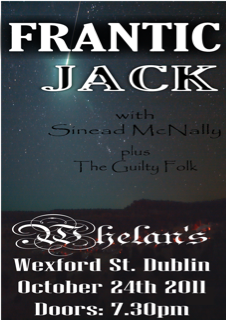