“We’re smitten with the sounds of this Wexford-based folkie with a marvelous voice, a great sense of musical adventure and a sussed approach to arrangements”
IRISH TIMES

Ian Doyle aka The Man Whom is proud to announce the release of his new single ‘Call All The People’ out March 4th 2011. Described by critics as “A magical indie-baroque blend of Villagers and Neil Young” Doyle’s music is superbly crafted, and at times beautifully heartfelt. ‘Call All The People’ is a clear indication of what is to come from the Wexford based song smith.

The opportunity to spend a considerable amount of time crafting and developing his debut album serendipitously came about due to the current economic situation and by extension, the activities of the Irish bankers, developers and some politicians. From here, Doyle set the task of recording his songs and attaining the one thing that had eluded him for many years, despite his best intentions; his first studio album. Enlisting the skills of musicians and friends, Brian Hassett (bass), Christian Best (drums), and recording engineer Donal Byrne, Doyle and his band retreated to the seclusion of a house in Kilrane Village and worked intensely to record the majority of the album.

Further contributions to Doyle’s album include polished string arrangements written by composer Peter Fahey and performed by the Mamisa Quartet, as well as local guitarist Clive Barnes who played peddle steel for the track Over and Under. For the finishing touches, Doyle spent two weeks in Exchequer Studios, Dublin with producer Brian Crosby and mixing engineer Phil Hayes who shaped and honed the original recordings.

The result is an album which is the sum of its parts, held together by a shoestring and interwoven with the goodwill of creative, talented (albeit jobless!) friends. 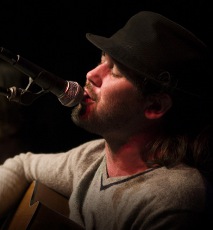 Tackling any project by yourself can be a lonely process but that is how it all began for Wexford’s Paul Creane when he embarked on recording his debut album, Tommy Black And The Twelve Days Of Lucy. Help soon appeared in the guise of a (bearded) angel, Donal “Dodo” Byrne. Fortunately, this angel was a multi-instrumentalist with a recording studio who was looking to embark on a musical project to further his own recording experience. The snowball was on its way down the mountain.

As with most independently-funded albums the road to completion was long but, like a story-arc  straight out of a fantasy novel, the duo would make many talented friends along the way. Regular open sessions in local haunt The Sky & The Ground resulted in the addition of fellow songwriters Seamus Turner andEugene Campbell to a blossoming live band that now included Dodo‘s three brothers (Footzy, Cillian and Lorcan).What began as a solo project had now become quite a family and it is this ethos that saw the culmination of what we now all know today as The Changing Band.

The Changing Band no longer simply play Paul Creane songs but also original numbers penned by each of its members (with both Turner and Campbellcurrently in the process of recording their own “solo” albums) under the monikerSons Of The Sky. Honorary inductees of this ever-changing group include Ian Doyle, Mick Flannery and many more. Expect to hear the phrase “And this is x by X & The Changing Band” quite alot over the years to come.

The release of Tommy Black And The Twelve Days Of Lucy in April 2011 marks the beginning of a new chapter in the book of The Changing Band, a book that, once you begin, is just so damn difficult to put down