Originally born and raised in Edinburgh, Ruarri Joseph found his songwriting roots in the southwestern Pacific. A move to New Zealand followed his parents’ divorce, and an 11-year-old Joseph found himself coming of age in Dannevirke (population 6,000), an isolated, rural farming community. Dannevirke was picturesque but remote, dotted with wooden shacks and hand-painted signs – not the most engaging environment for a young, would-be musician. “Relocating to New Zealand was an amazing experience, and moving away to start a new life was a romantic idea at first, but when you’re a teenager you tend to feel disenfranchised wherever you are, however beautiful the surroundings might be.”

Joseph pined for the Joan Baez and Joni Mitchell records his father had played back in Edinburgh, and began to seek out music of his own, eventually finding his way to that decade’s best: grunge, and the fuzzed-out, thrashy riffs of bands like Nirvana, Mudhoney and Pearl Jam, taking in a little Britpop along the way. With those sounds filling his days, Ruarri spent his early teens busking around the local area, dabbling in punk and knocking around in a handful of short-lived outfits. With very few live music venues around, strict age restrictions operating at the local bars and a lack of any real music scene, Joseph and his friends learnt to improvise, putting together mini tours of the local schools, turning up in time to knock out improvised sets for the lunchtime crowd. These shoestring musical adventures were enough to convince Joseph that bigger things awaited.

At 16, Joseph packed his suitcase, picked up his guitar and departed his blink-and-you’ll-miss-it town for the lure of London’s bright lights, spending a year in a rather grim Deptford flat on the notorious Pepys estate (as seen in Gary Oldman’s 1997 film Nil By Mouth) before moving down to Cornwall’s coastal county. During his second live show there, at the Blue Bars in Porthtowan, Joseph met his would-be wife, and found love and domesticity blissfully superseding his youthful musical endeavours. “Growing up, I always thought I’d be in band, but I became a father at a very young age [Joseph was 19 when his daughter was born] and that took over my life. My music got sidelined, and when I got back into it, I realized going solo would be easier than trying to work around the commitments of a band.” Joseph returned to music, writing with renewed purpose, and perfecting an earthy, folk-leaning guitar style built on supple acoustic finger-picking and deep, warm vocals – a style that would go on to earn him comparisons to Jack Johnson’s laid-back acoustic jams. Joseph’s first independent release, the 2006 EP All Substance and No Style, brought him to the attention of Atlantic Records, who oversaw his first official album release, 2007’s Tales Of Grime and Grit. “That first album came out really quickly,” recalls Joseph. “I’d gone from playing tiny pubs and small clubs to suddenly being on this huge major label ticket.” It was a dizzying change of pace for the young artist, who found himself missing the autonomy he’d enjoyed as an independent artist. “It was all moving too quickly. They [Atlantic] were really pushing me for a second album, and for the sake of my own sanity, I thought it would be best to leave, so I opted out.”

Abandoning a major label contract so early into a promising pop career was a bold decision for an artist still honing their craft, but one that paid off for Joseph, creatively and emotionally. “There were no regrets, no bitter feuds. It was a reasoned decision because [being on a major label] wasn’t right for me at the time.” Waving goodbye to Atlantic, Joseph set himself free of all unnecessary ballast and went back to basics, converting his back garden shed into a makeshift studio where he dedicatedly tinkered away with new songs, layering up guitars, drums, banjo, accordion, vocals and harmonica until he’d assembled a record that captured that sense of creative liberation, an album he named Both Sides Of The Coin. The record was released in 2009 via Joseph’s own label, Pip Productions, and proved to be a career-affirming achievement for the songwriter. “Both Sides Of The Coin was me standing on my own two feet, and I’m really proud of it. A lot of young people think being signed to a label will solve all your problems, but it’s much better to find your own way first, and build your own foundations and fan base.” 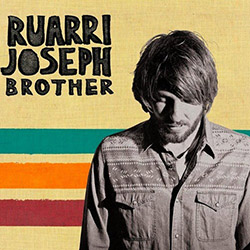 His follow-up release, 2011’s Shoulder To The Wheel, was an equally freewheeling affair, refining Joseph’s talent for poetic, toe-tapping folk ballads. The record peaked at number 8 on the iTunes Singer-Songwriter chart and saw him taking to the stage at the Union Chapel in Islington to support Foy Vance. The release also earned him favourable comparisons to the chart-topping pop savvy sounds of Damian Rice and David Gray, artists Joseph now shares management with. Does he feel a musical kinship with those troubadours? “Well, they’re songwriters in a very traditional sense. For them, it’s about the music and the songs, not the image or the videos; it’s not gimmicky. And I like that. If you grow up listening to Bob Dylan and Cat Stevens, like I did, then that’s where you’re going to head.” There’s certainly an honest, salt-of-the-earth feel to Joseph’s oeuvre, a grounded quality that plants his roots-driven compositions on solid, steady ground. It’s a style he indebts to the responsibilities of family and fatherhood. “Being a young dad was the best thing that ever happened to me. If you need something to focus and ground you, it’s having children”.

That idea of family is one that beats strongly at the heart of Joseph’s newest album, Brother. For Joseph, the single word of the title symbolizes “companionship, community and closeness.” It marks a gentler, more thoughtful turn than Shoulder To The Wheel, informed in large part by the loss of a close family friend who passed away in 2010, leaving behind a young son and a pregnant wife. “He was a great guy, and a great songwriter. His death was a wake up call for me; it made me re-evaluate my life and what I wanted. I actually got a bit cross with myself because I realised I’d contained myself into this tiny bubble, and it made me want to get out and reconnect with the world.” Out of the first tentative sessions on his guitar following his friend’s death, sketches of songs began to unfold, meditations inspired by the bravery of his friend’s widow, and the sense of strengthened friendships that had bloomed out of their community’s collective grieving. “A bunch of our mutual musician friends got together to learn his songs and songs he loved and we all got on stage and played together at his wake.” It was after this tender send-off that Joseph realized the next album would be a group effort. “I worked with a band on this album, rather than doing it alone. I wanted Brother to be a record that lots of people could sing to.”

The first song to emerge, Till The Luck Runs Dry, turned out as an ode to optimism. “It’s about just getting on with it. Every day, it’s pure luck that we’re here.” The boot-heels-readied, gently determined stance of that song is a motif continued throughout Brother, being not so much a wallowing exercise in grieving and loss, but rather a reflective, onwards-looking meditation on “the stuff that happens once the grief subsides,” the friendships forged and the love and memories that carry you through the heartache. There’s a light, bluesy Americana at work on No More Sins, with tambourines and plucky banjos embellishing songs such as Mad World Waiting and the slow waltz of The April Spin, songs that sing of closure, hope and the healthy ache that comes with healing. It’s a journey that reaches its cathartic peak on the uplifting bridge of Anyway, in a crescendo of fluttering cymbals, soaring strings and life-affirming lyrics, before dipping gracefully into the album’s thoughtful, piano-driven eponymous endsong. “Brother isn’t an elegy,” says Ruarri with a smile. “It’s a celebration.”