Drawing from the deep well of traditional and vernacular Southern song that Taylor has explored and documented as a practicing folklorist, as well as the more alchemical strains of 1970’s country- rock, dub music, and kosmische music, “like Van Morrison circa Astral Weeks, Hiss Golden Messenger confounds traditional-music genre expectations” (according to The Huffington Post.) Distinguished by their fascinatingly ambiguous conjuring of spiritual–and often specifically Biblical–
concerns and characters, as well as a taut lyricism informed by writers as disparate as Ronnie Lane and Lew Welch, Taylor’s unabashedly ardent songs rank among the most exquisitely crafted and eloquent of his generation.

Their 2011 LP Poor Moon has been hailed as a masterful and moving country-soul statement on faith and family by Pitchfork, Uncut, Salon, and many others, leading to profiles of Taylor by NPR, The Oxford American, and Interview Magazine. In April of 2013 Paradise of Bachelors will release HGM’s eagerly anticipated full-length follow up to Poor Moon, the remarkable Haw (PoB-06).

“Fans of Will Oldham and Bill Callahan will find much to admire in the work of MC Taylor, a revivalist who also lectures in folklore.” – The Guardian

“a thing of gentle charm and unmistakable cosmic American beauty. It is, for those of us who delight in the likes of Iron & Wine, our first contact with a new and wonderful songwriter” – The Independent 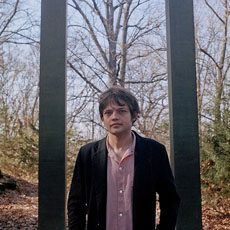 From a very young age Nashville guitarist William Tyler has been as much prized for his dexterity & subtlety as he has been for his ability to coax wilder passions from his guitar, see: his long-term role in Lambchop and his touring role as part of the now-layin’-low Silver Jews. And yet the vital, incandescently beautiful solo guitar
record he released in 2010, ‘Behold the Spirit’ was a revelation, Pitchfork called it “arguably the most vital, energized album by an American solo guitarist in a decade or more.”

With his forthcoming 2013 release on Merge, ‘Impossible Truth’, he has cracked open another beautiful world for guitar-heads to immerse themselves, a joyous ecstatic recording flecked with pedal steel and brass, recorded by Lambchop colleage Mark Nevers. Listen to the track ‘Cadillac Desert’ below and you’ll get a taste. Impossible Truth will challenge your ideas of what an instrumental guitar record can and should be. As touring buddy Michael Taylor of Hiss Golden Messenger puts it “He’ll take you over the stiles, he’ll love you up and down, and then he’ll make you cry for the world and what we’ve done to it. Willy T’s got the vampire blues. And there’s only
one like him.”

“But then a record comes along like this new William Tyler album, “Impossible Truth”, on Merge, which doesn’t just feel like a really satisfying and beautiful set, but one which also stretches the edges, a little, of the scene to which it notionally belongs… a good part of this terrific record feels less like an exploratory folk session, more like a virtuoso guitarist and arranger using the tools of a folk musician to reconsider and deconstruct rock music” – John Mulvey, Uncut.

Selected Press for ‘Behold the Spirit’.

“The world is crawling with Fahey-loving acoustic guitar players these days–in large part thanks Tompkins Square–but ones as good as William Tyler are rare.” – Dusted Magazine

“You either fully embrace Fahey– like, say, the late Jack Rose– or you run the other way, like Ben Chasny with his work as Six Organs of Admittance. A middle ground exists, certainly, but it’s rarely been claimed with the grace and elocution of Behold the Spirit, the debut from young Nashville guitarist William Tyler. Arguably the most vital, energized album by an American solo guitarist in a decade or more, it accepts Fahey’s legacy while escaping its shadow. Moreover, it’s simply a joy to
hear.” 8.6, Pitchfork

“It is by its nature something quite other, that is at once strange and almost unspeakably beautiful.” – All Music Guide