THE SCHOOL are a pop band from Cardiff, signed to legendary Spanish label Elefant Records.

They play fizzy orchestral pop music for people who are partial to a bit of dancing, dreaming, swooning & heartbreak.

Debut album ‘Loveless Unbeliever’ was released in 2010 and appeared in over 70 ‘Best of 2010′ lists, it was 6Music’s Album of the Day, Rough Trade’s Album of the Week and Radio Nowhere’s Album of the Year. BBC Radio Wales’ Adam Walton declared it his “favourite Welsh pop album of all time”. Oh and Molly Ringwald is also a fan.

Their latest release, ‘Reading Too Much Into Things Like Everything’, sees the band return triumphantly with a 12-track 29-minute album crammed with classic pop songs about love and loss.

Exploring a wider range of influences, you’ll hear THE RONETTES then THE RAMONES, FRANCOISE HARDY then a hint of MADNESS and a nod to THE SUPREMES – but always with The School’s modern twist and distinguished sugar sweet vocals.

‘Never Thought I’d See The Day’ / ‘Where Does Your Heart Belong?’ are the lead tracks on the first single taken from the album, backed by cover b-sides ‘When He Kisses Me’ (Jonathan Richman) and ‘I Wouldn’t Know What To Do’ (The Honeydrips), released on limited edition 7” vinyl and digital download.

Album ‘Reading Too Much Into Things Like Everything’ is now out on Elefant Records. 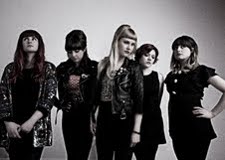 Once described as “sounds from a transistor radio abandoned in a rural cinema”, this is reverb soaked noise pop of the finest order – distant layered harmonies, swirling organ & distorted guitars. Their sound recreates a “Girls In The Garage”- aware take on Spector’s Wall of Sound and 80s and 90s noise bands.

Formed in September 2011, the band released a cassette on Scotland’s Soft Power label in April 2012, which sold out worldwide within a week. The follow up to that, a 7” single featuring the tracks “Green Eyed” and “Danny Wood”, again on Soft Power Records, was released in Oct 2012 and subsequently sold out within weeks. Less than a month after that, September Girls released a three-track 7″ on California label Matinée Recordings, featuring the tracks “Wanting More”, “Hells Bells” and “Man Chats”. Their next 7” is to be released in March 2013 on Cork’s Art For Blind Records and will feature tracks “Talking” and “Some For Me”.

September Girls are currently working on their debut album, due for release in late 2013.