Whelanslive and Word of Mouth Agency is proud to present the first ever Irish tour of legendary UK post-punk band The Nightingales in support of their new self-released album For Fuck’s Sake, which has already garnered very favourable reviews from the likes of MOJO – “Heartening evidence of the British art of mentally transforming ennui and chagrin into something approaching gold” – 4/5 stars.

Opening each night of the tour is infamous alternative comedian (and Stewart Lee’s hero) Ted Chippington, who will also be making his Irish debut.

Birmingham’s original punk group The Prefects had been part of The Clash’s ‘White Riot Tour’, recorded a couple of Peel sessions, released a 45 on Rough Trade
and, years after splitting up, had a retrospective CD released by NY label Acute Records to all round glowing reviews – from Rolling Stone to webzines.

The Nightingales was formed by former members of The Prefects following that band’s demise in 1979. Described in John Robb’s definitive book on ‘post punk’ (‘Death To Trad Rock’) as “The misfits’ misfits” and comprising an ever-fluctuating line up, based around lyricist/singer Robert Lloyd, the Nightingales enjoyed cult status in the early ’80’s as darlings of the credible music scene and were championed by John Peel, who said of them – “Their performances will serve to confirm their excellence when we are far enough distanced from the 1980’s to look at the period rationally and other, infinitely better known, bands stand revealed as charlatans”.

The group recorded a bunch of critically acclaimed singles (Almost always ‘Single Of The Week’ in the music press) and three albums, plus many radio sessions for their great supporter Peel. They also regularly toured the UK and Northern Europe, as headliners and supporting acts as diverse as Bo Diddley and Nico.

In the late Eighties the Nightingales stopped working but, following the occasional gig between times, they re-grouped in 2004, with Lloyd being joined by original Prefects guitarist Alan Apperley.

After fucking about with various wastrels, precious sorts and mercenaries the group arrived at its current line up, which features Lloyd, Apperley, Andreas Schmid from Faust on bass and ex Violet Violet drummer Fliss Kitson.

Since restarting the group have been more productive than ever – releasing five 7″ vinyl singles, a 10″ EP and five studio albums (plus two live albums), touring England, mainland Europe and USA numerous times and recording many radio sessions along the way. They have been invited to play various festivals in Europe and the States, including Glastonbury and SXSW. Their “Let’s Think About Living” 45 was ‘Single Of The Week’ on BBC 6 Music and they have continued to receive regular rave reviews for their records and live shows.

The group’s “No Love Lost” album was released by Cooking Vinyl in 2012. Described by Mojo as “Brilliant. One of the fiercest and most exhilarating rock records in ages” the record features guests, U.S avant-garde composer, Katherine Young on bassoon and Hans-Joachim Irmler, founder of krautrock legends Faust, on keyboards.

The Nightingales recorded another album at Faust Studio in September 2013. “For Fuck’s Sake” is a self released, limited edition vinyl LP available only at the group’s gigs. The band will be playing live shows in Europe and USA over the coming year and they are very pleased to be performing in Ireland for the very first time in May 2014.

“Contender for gig of the year” – MOJO Magazine

“Their freshest and most subtly intoxicating work to date” – The Observer

“The missing link between Can and the Glitter band” – The Quietus 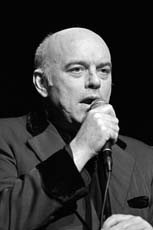 The Nightingales’ buddy and regular touring partner is legendary, cult ‘anti comedian’ Ted Chippington. Once described in Sounds magazine as “the funniest man alive”, Chippington’s ruthless disregard for the conventions of stand-up nonetheless made him a perennial outcast from the 1980s comedy scene.

At a time when politically right-on performers such as Ben Elton and Harry Enfield were at their peak, Ted initially struggled to break through to a wider audience. Of course, this was of no concern to Ted who continued to plough his own individual anarchistic furrow and was eventually to have a couple of minor hit records and to be recognised as a major influence by the majority of todays ‘alternative’ comedians.

His fans remain convinced of his status as the neglected comedy genius, and remember him with an affection that is rarely afforded to stand-up comics. Indeed, a host of comedians, including Stewart Lee, Phill Jupitus, Simon Munnery, Josie Long and many others, staged ‘Tedstock’ at London’s Bloomsbury Theatre a few years back with the proceeds enabling the release of the 4 CD box set “Walking Down The Road… A History Of Ted Chippington”. The box set was heralded by major articles in the Guardian and Independent newspapers, plus a Ted feature on BBC TV’s Culture Show, and quickly sold out.

Reportedly retired from showbusiness in the 1990s to pursue a truck driving career in USA and Mexico, Ted is now back. His most recent release is a 10” EP titled “Blues Fan” and he has recently played throughout the UK and in France, Germany, Austria and Switzerland with the Nightingales.