Although only in existence a few months, The Vincent(s) have been packing them into Cork venues and along with cohorts The Altered Hours, The Maori John Wayne and Trumpets of Jericho, represent something of a sea change in music that will be emerge from the Cork of 2013. 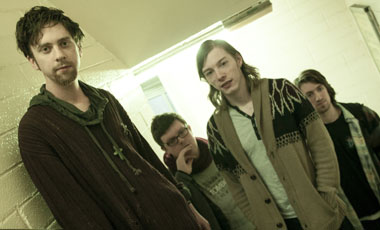 Raw recordings, noise and psych are the orders of the day, and with their debut single, ‘Asked Her To The Dance’, The Vincent(s) pave the way for what will be an interesting year of music from Leeside.

Its roots lie in surf sounds and early 90s US alt-guitar groove, which sit alongside an unmistakeable Irish vocal and universal sentiment; sometimes when you get blown out, all that’s left to do is rock out.

“As a band, we want to bring something completely new to the Irish music scene,” says frontman Marcus, “something a bit darker than we are used to. Like every other band around, we wear our influences on our sleeves but, at the same time, we try to transcend them and make something completely compelling.”

‘Asked Her To The Dance’ is an indie nightclub cert and a magic way to announce your arrival.

The Vincent(s) have hooked up with Irish indie label FIFA Records to put out this taster of what’s to come, with an album due out later in the year.

“Their debut single ‘Asked Her to Dance’ is a total treat.” – BBC Across The Line