It takes balls to let Purling Hiss get in your face- their records are a half-corroded, screaming roar of high-end guitars crushed together, obliterating vocals and drums with their singular assault. Well, if you’ve got balls, get ready to swing ‘em! With Water On Mars, Purling Hiss have broken out of the basement, run through the bedroom and are now loose, out in the streets, blasting one of the great guitar albums in the past couple minutes. Yes, Water On Mars, from the swirling sound of Purling Hiss – Drag City’s gonna let you have it, come March 19th, 2013!

Water On Mars is Purling Hiss’s first recording outside the fuzzy confines of Mike Polizze’s inner rock utopia, where the first three albums and EP were constructed in solitude with a home-recording setup. Over the past couple years, Polizze’s been working with a band and fine-tuning new songwriting ideas while playing shows all over the place. Now there is a center to the Hiss maelstrom, with Polizze’s guitars slugging, sizzling and spiraling their way around the rhythm throb, singing disaffected in shifts both aggro and slack (and around to the back) through the course of a song, with production highlighting the schiz by buffing the raw power into a streamlined blast. If that doesn’t rattle your caveman brain, nothing will! Purling Hiss have a deeply satisfying way of drawing from the red, white and blue wells of 60s, 70s, 80s and 90s rock to inform their own sound, giving things a retro ring while doing what they do in the Philadelphia of today – and no other time could apply, really. So bring your neanderthal face out to space, grab a glass, and prepare for a pour from Water On Mars, Purling Hiss’ first banger for Drag City, out in March!

Some time in the distant future there was a shift in the magnetic field around a star in the system of Sirius which lead to an influx of cerebral radiation bathing the Earth of the present. Our planet is now drenched in the collective consciousness of a trillion minds reaching forward from the aeons past and back from future aeons ahead all to one period, in all dimensions, with one voice. That voice has been interpreted by shamans and physicists alike, each interpretation different-each correct. Wild Rocket interpret this voice and translate the message into rock, both physical and metaphorical. When Wild Rocket began to interpret the message is irrelevant.Time is irrelevant. A cosmic trigger has been pulled. 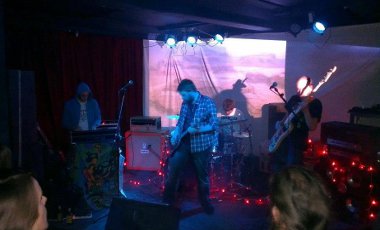