Kan is a union of four of the finest, most influential, award-winning, in demand artists of the 21st century traditional music world.

Kan is a unique melding of the bold and beautiful flute virtuosity of Brian Finnegan, from Armagh in the North of Ireland, with the expressive and daring fiddle deftness of Aidan O’Rourke, from Scotland’s Isle of Seil, cemented by the organic and intuitive drumming of Harrogate’s James Goodwin and the unfettered, playful guitar reinventions of Ian Stephenson, out of Selby in Yorkshire.

Sleeper is the debut album from Kan, and the first fruits of the band’s intention to create what they call “a homogenous quartet of lead instruments”, which emerged from the musicians’ frequent past collaborations – both in their compositional and recorded work and in less formal and more lubricated sessions.

The tunes on Sleeper have, as their backbone, Brian and Aidan’s Irish and Scottish traditions – focused on intricate, groove-entwined melodies whilst embracing Breton dance, Asturian jigs and the influence of avant garde jazz pianist Nik Bärtsch, and Israeli bassist Avishai Cohen.

On stage, Kan perform in an arc with no lead musician – “The drums are as important to the melodic content as the fiddle”.

There’s a mutual admiration bordering on fandom between the individual members of Kan which makes them compelling and joyous to watch. When asked why he joined Kan, Ian replied:

“There are probably dozens upon dozens of grown men who grew up listening to Flook and Lau, harboring dreams of being in a band with Brian or Aidan one day. Well that’s me now. I’m chuffed to bits.”

See what we mean? The level of experience and weight of achievement in this one group becomes almost daunting when you try and list it.

But the most exciting thing about Kan is there’s never been a band like Kan before.

The Tzolkin is the sacred moon calendar of the Mayan people that connects the energy of heaven and earth, and 2010 was the year of Kan, a year according to the Mayan oracle to be a time for new beginnings, for planting the seed of some intention, project or dream, for taking a risk. 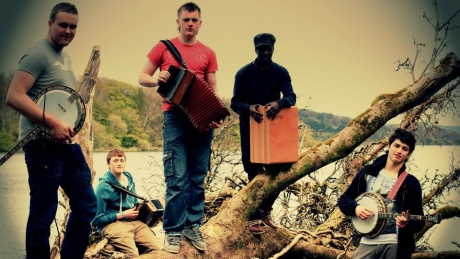 Formed in late 2011 as part of the annual folk festival, Sligo Live, Moxie are a Sligo and Limerick based band that formed through years of musical friendships from playing together at various festivals around Ireland. The band incorporates Irish music with other genres such as folk, rock and new age bluegrass.