This Whelan’s gig marks the debut gig of northside Dublin act, Workhouse Brides. Stemming from previous band incarnations, the three-piece have been based in their rehearsal room in Dublin 3 for many months progressively working on their specific brand of original music.

Their first recording, ‘Trial By Fire’, introduced the band with a pounding drum beat, grizzly guitar lines, staccato vocals and ambiguous lyrics. The song’s video features an interesting tip of the cap to Scorsese, Keitel and DeNiro.

Workhouse Brides are most likely the loudest band in Dublin without a bass player. Their influences include red wine and beer. 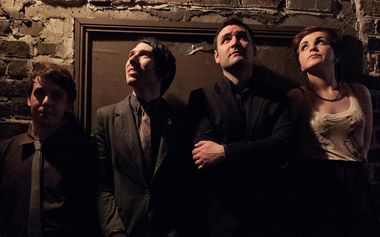 The Choir Invisible are a four-piece pop band in Dublin. With shades of ’60s French pop, jangly indie melody, shoegaze noise and the occasional suit, they’ve spent the past year making a name for themselves on the Irish live scene, as well as playing in the UK. Their singles have been spotted in Tokyo record shops, and have received occasional accolades from strange French websites.

They sing about escape and fantasy, about ticking time and about fast drives by clueless drivers at unreasonable hours. They have been featured on Dublin City FM, and a host of online radio shows and blogs. They sound like a dinner party in a bedsit with David Lynch.

Having released their debut EP Hundreds and Thousands in November 2012, they’re currently readying a new single and playing a few select gigs before the end of summer: catch them in Sweeney’s on August 2nd and co-headlining Upstairs at Whelan’s on August 15th with Workhouse Brides.