WE GO GO & THE VIBES

We Go Go and The Vibes play upstairs in whelans on Thursday 21st April, as part of their joint Irish tour, The tour has taking in venues both north and south of the border, with an attack on the UK also planned for late summer. The tour has been descibed by Hotpress as “A double-header definitely worth catching”

It all came about when We Go Go went into the studio to record two tracks for their forthcoming EP, where they met and worked with Leo Logan, from The Vibes After many beers, and conversations about taking over the world, they came up with the plan of ‘just going for it’ by pushing and promoting themselves as much as possible by getting out and gigging, and when you see these bands play, it will all make sense!  “Nobodies gonna call up and hand it to you on a plate, there are a lot of great bands in Ireland who deserve to be bigger, the only way to even register on the richter scale is to get out and play as many shows as possible, and hope that people like what they see and hear” (Keith – We Go Go) 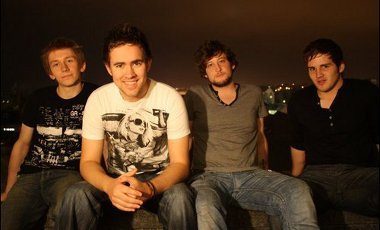 Hailing from Co. Leitrim, The Vibes released its first commercial single, Just Another Love Song, in 2005 reaching No.13 in the Irish Charts. Their song writing ability has been awarded to date by winning both the 2FM song contest and the National IMRO An Tostal Song Contest in 2005. After a line up change in 2006 the Vibes are back stronger then ever and are currently in the studio finishing work on their debut album.

The second single off the album “You’ll see my heart” was released on November 20th 2009, this download only release proved the vibes were here to stay when it went straight to No.1 in the Irish DownloadMusic charts. During 2007-2010 The Vibes have worked on perfecting its live sound by tallying a number of gigs across the country. The promise and initiative is certainly in place and the band intends to continue working on the live circuit as a matter of paramount importance in its schedule.

New single “Different Way Out” is now penciled in for release at the end of April. The single is being released in association with ‘Aware’ in the hope that we can raise much needed funds and profile for this excellent charity. The tunes not to bad either!

We Go Go are a four piece alternative rock band from the Irish midlands musical hotbed of Mullingar. Formed in March 2009 from the remains of other projects, the band’s profile has risen steadily over the past couple of years. Playing shows the length and breadth of Ireland, they’ve gained themselves a reputation as an incendiary live act. Combining powerful angular guitar lines, pounding drums and tight harmonies, the band’s debut single Nitpicker released in October ’09 reached no.4 in the downloadmusic.ie weekly chart, and led to the band being one of just 20 unsigned Irish bands chosen for the 2010 JD Set. Just fresh off their first Irish tour, the band are currently working on their their debut EP, set for a spring 2011 release. It will be distributed online through iTunes and all good retailers.

“Emo-flecked alt-rock. Angular and hard-edged, but with an eye for a bittersweet melody and some brilliant guitar interplay, the band make for an impressive prospect.” (Conor Moloney, Drop-D.ie, October 2009) . “With ‘Nit Picker’, We Go Go have a worthy song with chiming guitars and an appealing build-up from a restrained start.” (Jackie Hayden, Hotpress magazine, March 2010)

Check out www.myspace.com/wegogomusic or www.thevibes.ie for all the dates of the tour and make sure you get yourself with a gang of mates to one of the shows! Both bands are also on facebook and breakingtunes.