{If you plan on arriving after 10:30pm you’ll need to leave your name on the facebook event page so that you don’t have to pay into the Whelan’s club}

The launch of ‘The Community Games’, an album containing new songs by Cave Ghosts, Ginnels, Grand Pocket Orchestra and No Monster Club. All four bands will be performing Upstairs in Whelan’s on the night.

The record will be released by Popical Island on 100 limited edition white label 12” LPs. Ten collectable covers will be available; each one featuring a different member of one of the bands.

Grand Pocket Orchestra formed in Dublin in 2007, consisting of Paddy Hanna, Bronwyn Murphy-White, Mark Chester and Peter O’ Shea. With their unique ‘Fisher Price pop’ stylings, they attracted a whole load of plaudits, toured the world and wooed a lot of fans. One such fan was Bobby Aherne who went to so many of their shows that they decided they might as well just ask him to join. And so, on St. Patrick’s Day 2010, Grand Pocket Orchestra became a quintet.

Bobby also made his own music, using the name No Monster Club. In a sort of musical exchange, Paddy and Mark offered to become his live rhythm section, enabling them to tour Europe as a power pop trio. Their 2012 album ‘Dublin’ was dubbed the sixth best Irish album of the year by influential music blog Nialler9.

Meanwhile Mark was also recording his own solo material. Using the pseudonym ‘Ginnels’, he has thus far released three highly acclaimed records, the latest of which (double album ‘Crowns’) was selected as the fifth best album of last year by Totally Dublin. When he performs live, he is accompanied by Paddy and Bobby, as well as members of Squarehead and Tieranniesaur.

In 2012, after the release of their sophomore album ‘Ronald and Sylma’, Grand Pocket Orchestra replaced Toronto-bound drummer Maggie Fagan with Castleknock sticksmith Enda Canavan. Away from the drum stool, however, Enda was on bass-playing duties with harmonic summer popsters Cave Ghosts, alongside Jen Connell, Aoife O’Carra and Connor Walls. The first three songs ever recorded by Cave Ghosts are included here, highly accomplished and oozing sunshine.

As well as sharing a rehearsal room underneath Dublin city (where these twelve tracks were produced), all four bands share members. But despite their inextricable connection, the singular character of each project is remarkably evident on these songs; from the expansive garage pop of No Monster Club to Cave Ghosts’ reverb-laden beach lullabies, past the infectious plink-plonk indie rock of Grand Pocket Orchestra and on to Ginnels’ jangly noise jams.

This is the first time that all four groups (and all ten members) have been united on the same album. 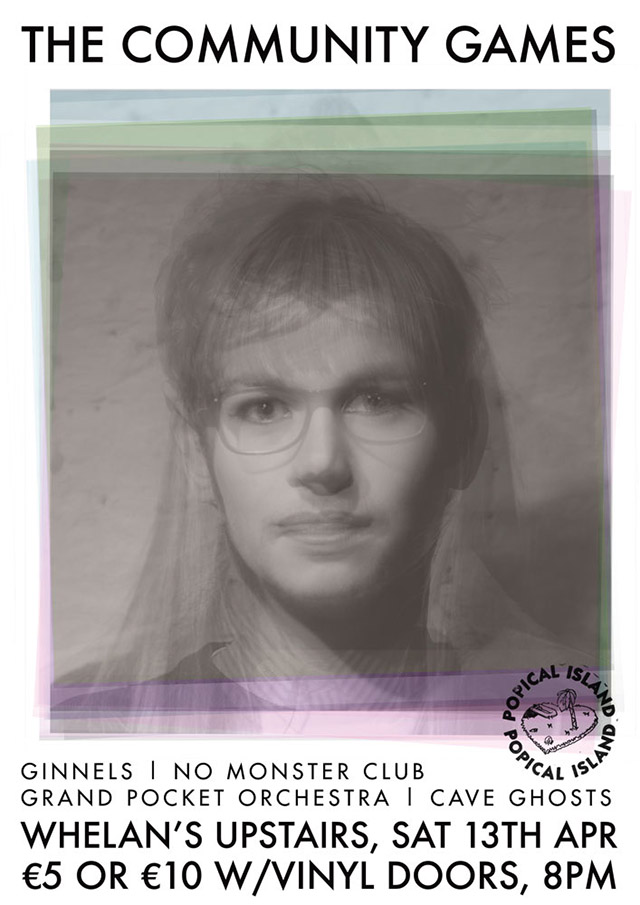