Wobbly comedian and star of ‘EXTRAS’ & ‘RUSSELL HOWARD’S GOOD NEWS’ brings her hit show back to Dublin for one night only! What happens when you’re branded ‘abnormal’, in a world obsessed with normality? This show is Francesca’s defiant, insightful and fascinating answer.

Intrigued by the power that a six-letter word has over so many people, Francesca shares her own life-changing journey of growing up as ‘abnormal’, being rescued from High-School-Hell by ‘Grange Hill’, letting Ricky Gervais take the piss out of her walk and working out what to say to the BBC after being offered the role of a, ahem, vegetable.

Whatever body you’re born into, it seems that most people share the universal desire to be ‘normal’. This show is for anyone who’s ever struggled to fit in, felt ‘different’ or wondered what the **** normal means? Apart from a cycle on a washing machine, of course.

“One of the UK’s most brilliant comedians” Observer

‘One of the sharpest comedians on the circuit’ The Guardian 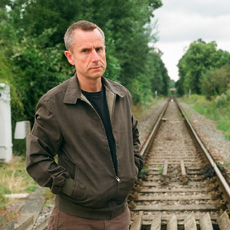 Jeremy Hardy is one of the UK’s foremost and respected stand-up comedians. An essential member of Radio 4’s The Newsquiz team, Hardy is back on the road this Autumn from 8 September 2012.

Hardy’s new live show could be called an extravaganza were it not for the fact that nothing happens. He comes on, talks for a while and then goes off again. He doesn’t walk about. In fact ‘show’ is a bit of an overstatement. But he does say quite a lot, most of it coherent. And he means well, which is the main thing. Still alive and able to speak for lengthy periods, this will not be so much as a one-man show as an understaffed cavalcade.

Jeremy’s perhaps best remembered as a younger man, but there is nothing he can do about that now. He became a stand-up comic in 1984 and will be one until he dies or wins the lottery. His live work has included Just For Laughs Montreal Comedy Festival, the Edinburgh Fringe Festival where he won the prestigious Perrier Award and numerous tours of the UK and Ireland.

A thoroughly witty, thought-provoking and funny evening. Try to see him if you can. The Public Reviews *****