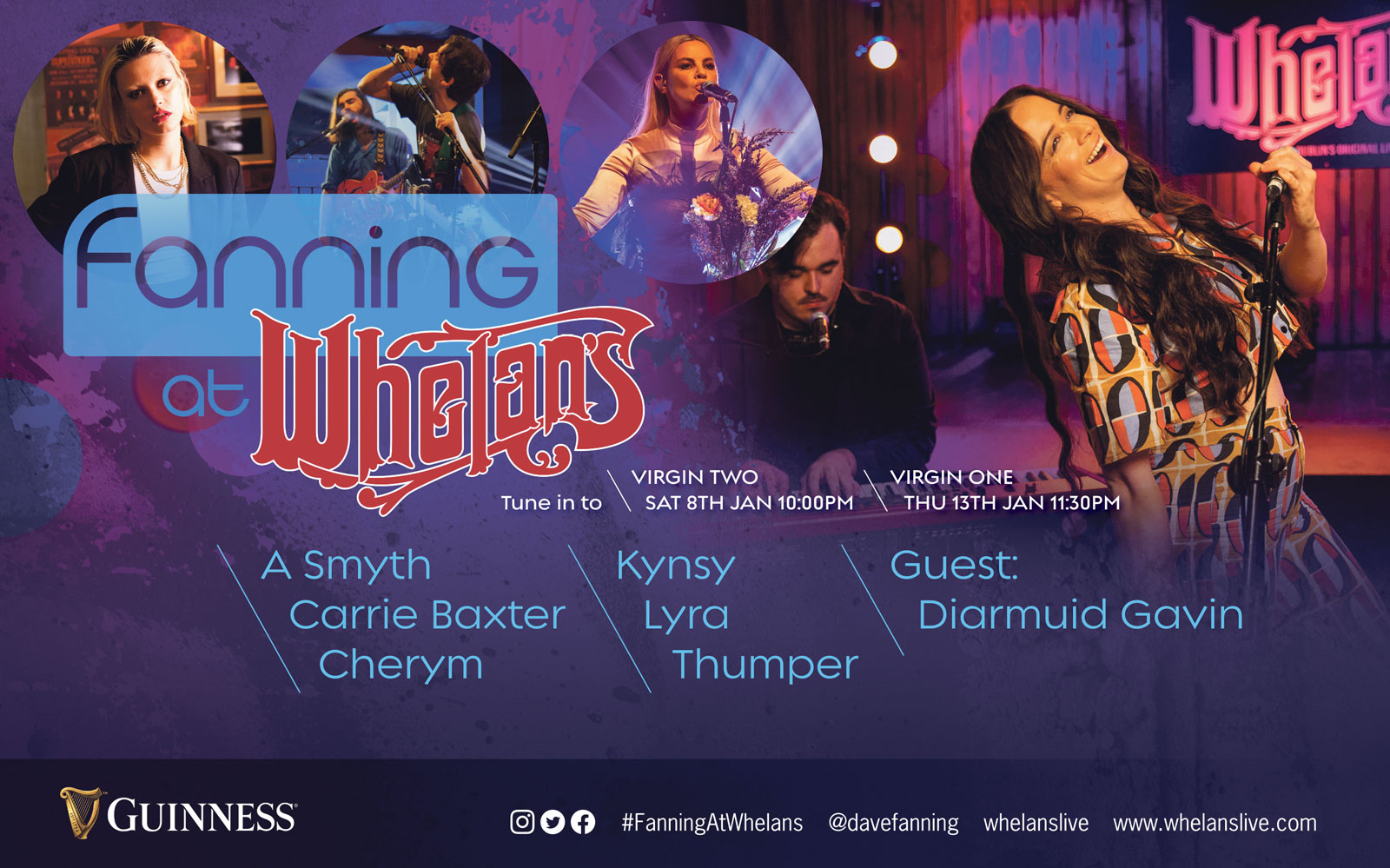 In partnership with Guinness and Whelan’s

Dave Fanning is a name that has become synonymous with Irish music. There is no Irish broadcaster that has done more to give young bands a much-needed break than the legendary radio DJ Dave Fanning, from his early days on pirate radio to the renowned Fanning radio sessions. And now Fanning returns to our screens doing exactly what he does best – showcasing the best of Irish Music, in a new series kicking off on 4 th December at 10pm on Virgin Media Two.

Partnering with Dublin’s best-loved live music venue Whelan’s and Guinness, all 8 shows will be filmed in the iconic venue and will feature exciting live performances from up to thirty up-and- coming and established acts, from a pool of Irish talent – from Inhaler to Nealo, Allie Sherlock to Thumper. With many bands relying on social media to showcase their performances, Fanning at Whelan’s will give many artists their very first opportunity to appear on national TV. In addition to band performances, in a ‘favourite music’ spot Fanning will also treat viewers to a special guest interview each week. Kicking off the first show is Noel Hogan of The Cranberries. So he’ll be talking about everything from The Smiths to REM!

Speaking about the upcoming show, Dave Fanning said: “Thanks to Guinness, who’ve been so supportive, I’m absolutely delighted – and, indeed, excited – to get the opportunity to showcase so much of what’s great about music in Ireland, which, as you’ll see, is thriving, despite Covid”.

Jeanette Levis, Guinness Marketing Manager, added: “We are delighted to team up with Dave Fanning and Whelan’s on this incredible series that spotlights amazing Irish artists and provides a much-needed platform. It has been, and continues to be, a challenging time for performers and the music industry as a whole. Ireland is bursting with talent, this line-up is certainly paving the way for Irish culture and we are very proud to be a partner.”

Dave Allen of Whelan’s said: “Whelan’s has been showcasing up and coming Irish and International musical talent for over 30 years The atmosphere at the shows here is world renowned. To be able to share the music we love on screens nationwide is a huge step for us. And to have Dave Fanning presenting the show, whose love and support for great Irish music is as strong as ours, is the cherry on the cake. We are proud to have such a great Irish brand Guinness partner us in this exciting programme”.

The debut show will feature performances from Inhaler, Allie Sherlock, The Zen Arcade, A. Smyth, Kynsy and Tolu Makay. The first show will air on Saturday 4 th December 2021 on Virgin Media Two with a repeat on Virgin Media One on Thursday the 9 th December and each consecutive Saturday and Thursday of December returning after the New Year on 1 st January 2022.

Fanning at Whelan’s is made possible by the generous support of the BAI, under its Sound and Vision Funding Scheme.