Dublin Bowie Festival is delighted to announce that members of Cello Ireland will join Gerry onstage to perform some specially arranged versions of Bowie tracks along with 2 rock drummers; Ben Garret (Overhead, The Albatross) and Daniel Lang (Red Enemy). They will also open the show. Gerry will also be paying a musical tribute to his former Hinterland partner Donal Coughlan, who passed away recently after a long illness.

We are delighted to announce that long time Bowie cohort Gerry Leonard is joining the Festival the day after he plays the Celebrating Bowie Concert in London’s O2 Brixton Academy for a special performance in Whelans. Gerry worked extensively with Bowie featuring on the Heathen, Reality and The Next Day albums. He toured with Bowie on the Heathen and Reality tours, and was musical director for the Reality tour and DVD. He has the only original writing credits other than Bowie on The Next Day, for the songs “Boss of Me” and “I’ll Take You There”.

Gerry will be performing Bowie material with some special guests as well as his own Spooky Ghost solo output and the event will also feature a Q&A session chaired by Professor Eoin Devereaux whos book ‘David Bowie: Critical Perspectives’ will be launched in The Winding Stair Bookshop earlier that day. 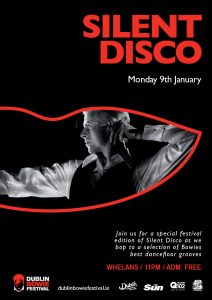 Join us for a special festival edition of Silent Disco as we bump and grind to a selection of Bowie’s best dancefloor grooves and some hazy cosmic jive.

Whelan’s Silent Disco, now every Mon, Tue & Wed from 11pm – 2 DJs, just pick the one you like best [Free Entry] plus Late Bar.