A Benefit for the Concern Horn of Africa Crisis Appeal

Many of Ireland’s most exciting & original independent musicians will come together to raise emergency funds for the East African drought & famine crisis.

AND SO I WATCH YOU FROM AFAR. 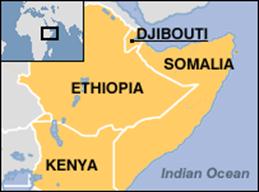 The drought situation in the Horn of Africa has reached crisis levels. This is the worst drought to hit the region in 60 years. More than ten million people are in need of humanitarian aid; including approximately 3.2 million in Ethiopia, 2.8 million in Somalia and 3.2 million in Kenya.

The drought is caused by the La Niña phenomenon, which leads to increased rains and flooding in southern Africa, but has resulted in below normal rains in the Horn of Africa region. It hasn’t rained properly in thre region for two years. Five of the past seven years have seen chronic drought in the region due to poor or failed rains.

Although the rains have now arrived, rainfall is expected to be less than average and inadequately distributed. People severely affected have lost nearly all their assets, and if the current rains are inadequate, and indeed next rains thereafter, the crisis will get even worse.

The UN estimates that less than 50 per cent of the money needed for the emergency response is available. Concern is working to prevent a crisis situation, such as in the 1990s where a quarter of a million people perished due to starvation.

What are the issues?

Many of those affected are pastoralists, whose lives and livelihoods are sustained by livestock. The drought has devastated their crops, and their animals are dying from lack of water and basic nutrition. People have been travelling, many walking for weeks, to reach urban centres and refugee camps in search of food, water and assistance.

Around one in three children in Somalia alone is estimated to be suffering from malnutrition. In Kenya’s Turkana region, malnutrition levels are much higher than expected and have reached 37.4 percent – more than double the 15 percent level considered an emergency.

Concern CEO, Tom Arnold says: “Children are being particularly affected by the lack of food and water; in some areas malnutrition is affecting over 30 percent of children, one of the highest rates of malnutrition in the world.”

As a consequence of the situation, food prices have skyrocketed – in some places by 200%. The cost of maize has doubled in some areas. In northern Kenya, the cost of milk has trebled. In Somalia, people have faced similar price rises in basic essentials.

Most people simply cannot afford these price rises as they have absolutely nothing, increasing the urgency to get assistance to those in need of water and nutrition.

In some areas, particularly in Somalia, the crisis is exacerbated by conflict which can make reaching people with aid incredibly difficult.

Over 9,000 refugees a week are now arriving in the Dadaab camp, northeastern Kenya – the world’s largest refugee camp which is already under enormous pressure. Many children under-five are dying within a few days of arrival.

What has been the impact of the drought on families:

Conditions in the pastoral areas in particular are moving toward a ‘worst case scenario’. In some areas of Ethiopia the erratic start and distribution of the rains have led to a near‐total loss of crops. In Somalia, food insecurity conditions remain at emergency levels. Despite the arrival of the rains, pasture has been depleted, and thousands of cattle and goats have died in large numbers. People have seen major riverbeds dry for the first time in their lives.

Pastoralist families are dependent on livestock for survival, and have resorted to desperate measures to try to keep their animals alive. Many have used food normally kept for the family to feed their dying herds, some even going as far as to take the grass off the roofs of their houses, leaving them without adequate shelter.

Children are particularly suffering from a lack of food and water. In Somalia, the drought has forced people to migrate to cities such as Mogadishu, which is putting additional strain on limited resources.

Concern in the region:

Somalia: Somalia is one of the poorest countries in the world, devastated by over twenty years of conflict. Concern has been working in Somalia since 1986 responding to emergencies caused by conflict, drought and flooding. We also carry out longer-term development work which focuses on improving water facilities, nutrition, primary education, agriculture and other ways to help people earn a living.

Ethiopia: Concern Worldwide has been working in Ethiopia since 1973 and helped in the response to the 1984-5 famine. Although the situation has improved since then, the country remains vulnerable to erratic rainfall and is severely affected by the current crisis. Our work there focuses on long term health and nutrition, food security and agriculture, HIV and AIDS and education programmes, alongside emergency interventions.

Kenya: Concern’s work In Kenya has focused on livelihoods, reducing malnutrition in urban slums (particularly in mothers and children). We also advocate for imporved children’s rights and we also have HIV and AIDS education programmes.

How Concern is responding now:

Concern began warning about the current crisis several months ago.Concern began responding to the needs of this drought emergency since its onset in late 2010 and is currently reaching over 500,000 people in Somalia, Ethiopia and Kenya with clean water, food and nutritional care. 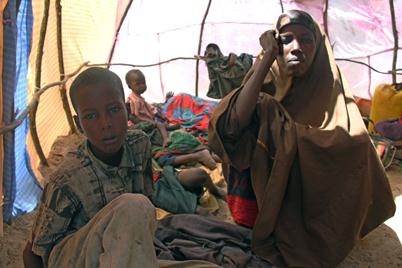 Darfuro walked 300km with her husband and six children from the Berbaare area to Koorsan IDP Camp. They had six children but one child died during the journey. Pictured is Darfuro with her child Mohamed (10), and in the background are twins Ali and Amina (6), Hussein (2) and (unseen) Isha (7). The children are suffering from headaches, fever, diarrhea, stomach pain, measles and malnutrition. The family are too weak with hunger and sickness to move after their 28 day ordeal. Photo: Jennifer O’Gorman, Concern

Somalia: Concern is one of the few international agencies working on the ground in Somalia, focused on the worst affected areas in the southern and central parts of the country. It is an extremely difficult and complex environment, and getting access to those most in need is a challenge. Working closely with local communities, we are helping to provide:

· Water: We provided water to almost 120,000 people in worst affected areas of Gedo, Galgadud and Lower Shabelle regions using water trucks. Drilling of two new boreholes is nearing completion in Bay and Bakool regions – upon completion, 15,000 people will have access to water.

· Food: 39,000 people are receiving a monthly ration of food through food vouchers in Mogadishu.

· Cash: 2,493 households received $80 each for rehabilitation of 16 rain water catchments.

· Nutrition: We are reaching more than 5,600 people in our nutrition programme, including children under five suffering from malnutrition at our sites in Lower Shabelle and Bay Regions, pregnant and lactating women, and children in supported schools. Three new feeding centres are being established in Mogadishu to provide services to people forced to leave their homes.

Kenya: Concern is reaching almost 100,000 people in Kenya. Half of these are receiving nutrition/food support, while the other half, or 11,500 households, who are in danger of losing all remaining livestock, have benefitted from livestock off-take and livestock health projects to protect surviving animals.

· Livestock “off-take”: Weak cattle, sheep and goats with low market value will be purchased for slaughter from pastoralists who cannot access regular markets. The meat will be distributed to poor households and institutions faced with severe food shortages.

· Provision of, and equipping of veterinary drug kits: 40 active community animal health workers will be equipped with basic veterinary drugs, such as multivitamins, wound sprays and powders, topical antibiotics, de-wormers, and eye ointments to prevent and control livestock disease outbreaks caused by the drought.

· Provision livestock feeds: Livestock feeds (hay and appropriate concentrates) will be provided to cattle as a means of protecting the valued breeding stock and milking herds necessary for the recovery period.

Ethiopia: Concern has been responding since March in the worst affected districts in Borena and Bale zones, Oromiya Region. Water shortages and water access problems are key issues.

· Water trucking: Physically trucking large volumes of safe drinking water to areas or communities where there is insufficient or no water to meet the needs of the people. The water is then distributed using tanks to people using jerry cans or buckets to affected people. With the arrival of the rainy season, this work has reduced in extent but we anticipate having to restart this if rains are insufficient.

Why are food prices going up?

Markets across the region are almost empty of staple foods, while rising global costs are having an impact on the humanitarian response. The global and regional food system is clearly not working for millions of people.

In south central Somalia the price of sorghum has increased by up to 240 percent compared to this time last year. The cost of maize has also doubled or trebled in many areas. In Kenya the price of maize has risen by 20-40 percent compared to this time last year. People are consuming less as a result – in northern Kenya milk is rarely available, or three times its normal price, and children have to make do with less than a quarter of their usual intake.

Who does Concern work with in Somalia?

We work with four local partners. Each partner is screened before partnership to ensure their credibility and thorough background checks are done. Stringent financial systems and controls are in place to prevent resources for which we are responsible being manipulated or fraudulently used. Routine reviews of these controls are carried out regularly to ensure control is effective.

For each partner , we have one Concern staff assigned to monitor regularly the partner activities and build their capacity.

What systems does Concern and the aid community have in place to ensure accountability and transparency?

Operational in Somalia since 1986, we have established a reputation as a committed humanitarian agency that works in a principled fashion and deals with all parties to the conflict in the same way.

We do not take sides; we run our own distributions; and we do not allow interference in identifying beneficiaries.

When interference is impossible to prevent, we suspend the programme pending discussion or we reallocate the assistance. This reputation serves us well and the consistency in our approach is extremely important and has ensured the safety and security of our staff with all parties to the conflict. In any attempt by a party to the conflict to dictate our work, we communicate openly with the target population and engage them in discussions with the party wishing to interfere in our work.

We undertake humanitarian interventions driven solely by the real needs of communities we work with.

Our humanitarian response is informed by findings of in-depth and participatory needs assessments. Therefore, we deliver vital assistance for those identified as most needy and vulnerable. Furthermore, a well detailed selection process is in place together with qualified and experienced national staff in all areas of our operations, which ensures we target aid to those who need it badly.

How do you know that Concern’s efforts are actually helping the Somali people and having a measurable impact? 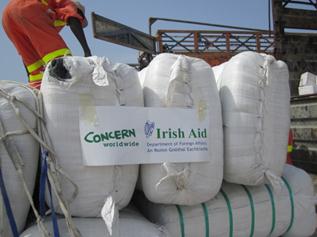 Concern measures its impact through external and independent evaluations of our work. We also have stringent narrative and financial reporting systems which allow us to review work being done with the country team – this is backed up by monitoring visits from Head Office when security conditions allow.

Within Somalia itself, a specialised monitoring and evaluation team drawn from different sections of the organisation visit programmes and review these, reporting to the country director. Regular visits and follow ups is engaged in by all management staff. Other countries in the region have similar processes in place.